After digging through some old draft posts I stumbled across this post I made a while back for a collab project that never really worked out with some people in the community of an untitled world. Thought I would post it just for fun and maybe you guys like the idea of the revolution world, I have a ton of other ideas and concept pieces if you guys do so make sure to comment on your opinions. Enjoy.

Hello, my name is Nicholas LionRider or Nicholas Kent for you pirates out there. My job for Theorycrafting101 was to focus on a few topics and one of which is a personal favorite is the idea of colonies. Now ever since the release of Marleybone in Pirate101 and as far back as Krokotopia in Wizard101, we have seen similarities between real life history and Kings Isle’s games. Kings Isle likes to take fun and exciting parts of actual history and give them a twist that makes the game both fun and educational. Since we have seen a lot of the UK (MB), Spain(MQ), Italy(VL) and even glimpses of French/Russian history with Polaris, why not touch on the origin of American history. Cool Ranch was a fun world and shared the western exploration side of America but not the roots of the Revolution and the birth of the original 13 colonies. 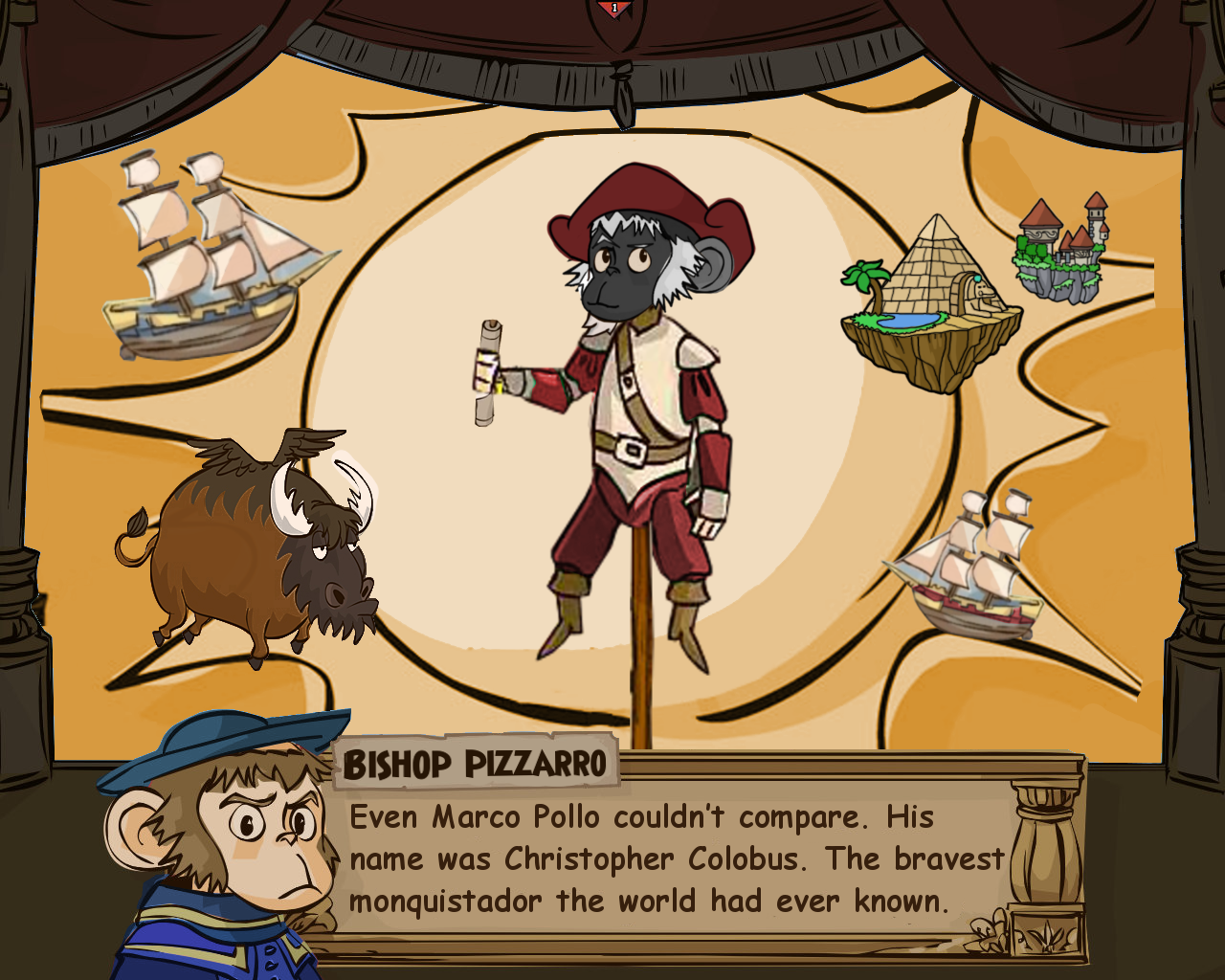 Prologue: My story line takes place some time after a few worlds. Gortez calls upon you with urgent news.

Gortez: Pirate, we need to speak. My army has grown ten fold since the last time we spoke. I adopted some mercenaries from the coasts of Zafaria. I am training them to become my elite generals. Although I have a army, my men require a navy in order to prevent the crown to be taken from me. Talk to Father Pizarro in the holy church located in Monquista city he will give you a start on where to find the strong navy I need. 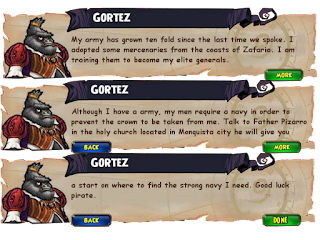 Once you talk to father Pizarro, he explains the best area to go for ships is the land of ______.

Father Pizarro: Please! Please! Don’t harm me giant! What? You aren’t here to squish me like a bug? A navy? Gortez? I can give you that. The best ship builders in the entire spiral are the dogs of _______.


A puppet show begins: You see, 50 years ago today, the greatest explorer to ever live set sail on a quest that would change the spiral forever. Even Marco Pollo couldn’t compare. His name was Christopher Colobus. The bravest monquistador the world had ever known. Sent by the royal family, Colobus along with his skilled group of men sailed many days to find a new stormgate to Rajah, this did not happen. Halfway through the stormgate Colobus became horribly lost. It got worse from there. A hideous monster the size of a titan attacked the ships. Destroying two…and a half of them. When Colobus and his crew arrived at the new world they were greeted…not so friendly. They were ambushed by natives! Colobus and his remaining crew fought back and thus the new world was born! Word spread quickly throughout the spiral of this world. Everyone wanted a piece of the land, Valencia, Darkmoor, even Polaris! Marleybone had it’s own trouble cateering to the needs of the it’s people. Riots began and the queen sent a group of settlers to the new world to make a new home governed for themselves. The first colony was born, Lexiton Port. Later more colonies formed until there was over a dozen! That is where you must go pirate. Be warned however, the locals don’t take well to people who favor Marleybone…better carry a weapon at all times.

Storyline: There are 13 colonies located in _____. Each is unique and above all else dangerous. The main story introduces you to many characters such as George Washingtalon, Benjamin Froglin, and Freezedrich von Snowben. All will aid you on your journey to making ____ a free world. By completing tasks in each colony you will get their respect and eventually will unite them to fight against Marleybone for their freedom. The war is a difficult one however the colonists are some of the best shots in the spiral. You will obtain many companions on your journey and bring back old allies such as Napoleguin to send Polarian troops to help _______. All this and more awaits you in  Book ___: Severered Colonies.
I am Nicholas Kent and I will see you guys next time!
Posted by Nicholas LionRider at 2:30 PM