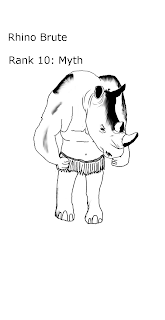 This is one of the first monsters I drew. I also started the Ape Overlords and might have them next but anyways, this is a Rhino Brute. There will be three kinds of Rhino Warriors, The Brute (Look up), the Armored (working title) and the Rhino Warriors. The Brutes above are bare muscle bad guys. No Wand, no weapon, just bare knuckle fists to smash you to the ground. They are rank 10 myth and I thought of this because if they smash a lot then they should wear gold armor and have spells that match their description. They smash you, so they have spells like earthquake, cyclops, troll ect. The other two are kinda the same attack stance. The Armored hold giant daggers with armor around their heads and chest. As well as having yellow eyes. The warriors are a mix of both. They aren't as fat as the brutes or as strong but they do carry the weaponry of the armored. So stay tuned and check out the new Zebrifica Concept art page.