The Art behind the Video

As the majority of you know, I am an avid artist in the community. So generally I wanted to throw in some actual art into my blog when and if I make posts. Today I have dedicated my post to talking about the art behind IAmTheChezz's new video, Wizard101 vs Spagoni (code named, Quizzy Wizzy). We have had this idea of questioning Tony Spagoni, Tyler's good friend about Wizard101 cause in reality, as active a player as Tyler is, Tony knows NOTHING about the game. It was very interesting hearing some of his answers. You can check the video out here, https://www.youtube.com/watch?v=FwI-AzEbTUY Now because this is about the art in the video, I will split apart the different pieces I did for the video. Enjoy -Nicholas LionRider 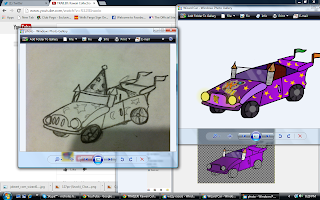 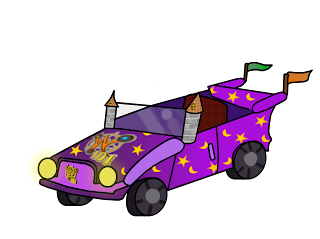 -Probably the most difficult piece in the video and one of my most favorite pieces. It is more of a race car design but hey, it was fun making it. This is for the scene where Tony is asked what mounts there are in the game, and obviously other than the one mount (the slowpoke sloth) there is only Wizard Cars. Since there are no other 'Wizard Cars' to use from the world, I needed to design one my own.
My first real concept and if I could I would change a few things from the final outcome. I still think it was a nice design and the process for it took even longer. From sketch, to inking, to painting, the entire process took around 4 hours, for about 2 seconds of screen time. Hey, I am a perfectionist.

This was probably one of the easier bits of art I had to do for the video taking me around 5 minutes, the only thing really easier was the crossing the names out of cards. I used a variety of different pet snacks and Comic Sans MS bold in order to create the labels. Going back to the old days of card design before LoTS creator and stuff. I thought it came out nice and to anyone wondering about why the book talent is so low, reading is for chumps! 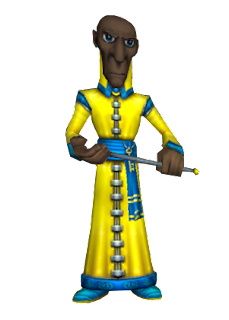 This was more or less just a fun thing to do, I used the colorize tool in gimp to change Cyrus' face and hands to a darker skin tone. Overall I think I did a good job and it came out with the same comedic reaction nonetheless.

By far the easiest thing I had to do, I was able to randomly select some of my favorite spells and just blank out the names of them. In the end, after consulting with Tyler, I made 16 spells: Phoenix, StormOwl, Wraith, Sunbird, Helephant, Ninja Pig, Cyclops, Judgement, Woolly Mammoth (deleted from the video do to time), Deer Knight, Stormzilla (deleted footage), Forest Lord, Seraph, Skeletal Pirate, Chimera and Snow Angel. They were easy to make and Tony's answers for them were priceless so these were fun to do. 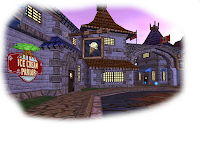 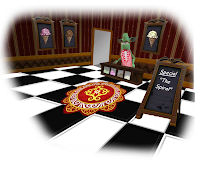 This was probably the one I am most proud of, it is actually two images and I think I honestly made them look realistic enough to be actual areas without either image being edited by a place in game. Used from screenshots, images on google, and a variety of other medias, both places were made in gimp and I think it turned out great. The first image is of the outside and the second is from the inside. The one preference I needed was there to be a sign that says that the "special" is called "The Spiral". Other than that, I had fun, I really like the gobbler worker. Overall I think I did a good job and am really proud of how it turned out for a few hours of work.

There was a few pieces of art we were going to make such as the symbols for each made up class Tony made, but in the end, we settled with what we had. Tony himself made the ambient background music as well as the thumbnail, I also did a minor role in cutting out both Tyler and Tony for the animated intro, but it wasn't really worth putting into this post. I hope you enjoyed learning a little more about each piece and hope to share more of the art in his videos in the future, until then I am Nicholas LionRider and I will see you in the spiral! PS, who saw the new elephant mount! Awesome I know right! K bye!

Posted by Nicholas LionRider at 10:14 AM