Is Aquila what we really think it will be? 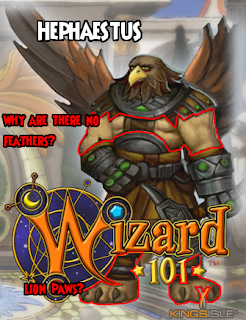 Now I am a long time believer that the images recently shown on the Wizard101 launcher are Aquila. Most people continue to say it is Empyrea. Now I will now state three facts to quickly prove they are either one in the same or Empyrea is merely a "Weirwood" of Aquila. A area of a world, however not the world itself.
Facts:
1. Both worlds seem to involve Eagles, look up both names and you will get images and links to various mythical eagle legends.
2. Sky Squids: We know as a fact Aquila has skysquids in their skyway (dang things killed my parents), and the first time we heard about Empyrea, was a quest about getting skysquid shipments into Wysteria.
3. Finally, both are from Greek mythology. Both derive from a background of Greece and their legends and stories. And from the look of the launcher, we seem to be seeing not only the Aquilan gods, but various Greek monsters, including the Hipocampus and Centaur.

The main reason I made this post is a recent discovery I have found. I don't believe the Aquilan gods are normal birds, but a rare species of griffons. Griffons are mythical creatures that have the top half of a bird (typically eagle) with wings, and the bottom half of a lion. This would make sense that as wizards we would be able to see them. As pirates, although we know there are magical creatures in Aquila, we never go searching to find the gods and magic. Look closely at the bottom halves of each bird. Hades is a vulture, Hephaestus, a hawk, Athena, a owl, and Ares, an eagle but they all seem to have a cat like bottom. Hades, Hephaestus and 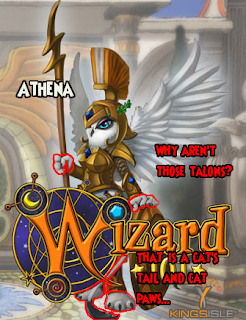 Ares all seem to have lower bodies that seem to fit the description of a lion, however, Athena, has the lower half of a snow leopard almost. I cannot be certain of which cat each has a lower half of, I just notice that each foot is a paw, and the males seem to have a strong muscular paw, while Athena (the only girl we have seen) has a slim paw much like that of a leopard, to match with the white (a snow leopard). Looking at the ingame statues in Pirate101, we can't see the different colorization do to them only being statues, however, in concept we can clearly see a difference. I just found this interesting but please comment below stating what you think about the gods, and Aquila in general. Until next time I will see you in the spiral!
Posted by Nicholas LionRider at 2:21 PM