Hello everyone! So I missed yesterday's post because I was trying to make this post as good as I possibly could. If you know anything about me and "The Chezz" it is, when we make content it is the best it possibly can. That is kinda an issue for us because we constantly try to outdue ourselves. Do to this trait, the post for yesterday was postponed until today. Without further ado, I present the, Captain Claw's Dangerous Hunt Bundle. 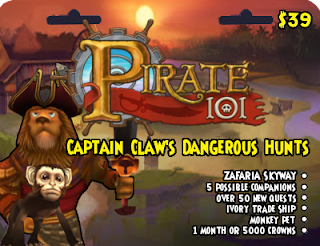 Kings Isle could approach the Zafaria skyway idea several ways and this is one way I thought of they could try. So the main idea behind this bundle was to introduce a different kind of way of getting content out to the players. Now do to a small "leak" in the community yesterday on this bundle by some random person. Still not sure how they got it. However I was able to get some feedback on some topics but most made no sense.
Obviously the artwork isn't perfect. I am a pretty decent artist but my editing software isn't up to par with KI's artists. Again it was never meant to be called real in the first place so it wasn't meant to be perfect. Here are a few comments that were pretty much constantly posted that kept saying it wouldn't make sense marketing wise.
Why it would be a smart marketing choice:
Of course it isn't a traditional bundle with a house, mount, pet/ship, companion and whatever else, but it could work. The point of the bundle is to save money by purchasing a "bundle" of several items. In KingsIsle, bundles are still saving you money but the items are all exclusive with a certain theme. Now although it is a world, pet and ship is it different than a house and mount as well? In this case Zafaria is meant to introduce side worlds. A lot of people don't realize that entire worlds are only around 20 bucks. Grizzleheim is actually only 20 dollars exactly. In addition you are getting the content of a new world, a pet and a ship. Is it that bad that you get a 20 dollar world, 15 dollar ship, and a 5 dollar pet? In addition you get 5 possibly companions and 5000 crowns. You are saving money that way. You pay $40 for maybe $55 dollars in value.
Here is a breakdown of content in a Wizard101 bundle using the crown shop as pricing:

2 Person Mount-15000 crowns-Based on treant mount
Pet-Typically around 5000 crowns (Can be different)
Large House with PvP arena-just a guess since a normal house is around 10,000 crowns, I would double that to get 20,000 crowns.
Gear-around 7000 crowns determining how good the gear itself is which is decent but slightly less than some very good crown gear.
Weapon-7000 crowns same as the gear for reasoning

That is how expensive bundle items are alone, so that is why bundles are a good alternative since they save money. Personally I don't think KI will do this method but it could work if you think about it.

The story of the World itself:

I have two versions of the story for a full world and a side world. This specific world has one skyway and a few areas. The main story takes place when you arrive at the main port of Zafaria. Pirate Zafaria shows a lot more of each species' kingdoms and is more jungle based. The story is about a zebra slave trader, resembling Reginald Baxby of Wizard101, who begins loading up ships with elephants, rhinos, lions and other Zafarian species to be slaves for Marleybone, Skull Island and Cool Ranch (or to be more accurate to history a possible Eastern, Early America world). The goal is to free Captain Claw (a lion privateer) and end the Zebra's rain of terror. At the moment he is outnumbered and so the only way to free the rest of the Zafarians is by assembling the strongest minds in ZF. They call themselves The Big Five. The Elephant Musketeer, Bello OneTusk (resembles Beloq and carries two pistols), the Leopard Witchdoctor Princess, Selena Hunt, the strong Rhino Buccaneer, Black Horn (has a large tattoo across his left arm like Mordekai and is shirtless and swings and anchor as a weapon), and the sly Cape Buffalo Swashbuckler, Gems-Buck (a mixture of the Cool Ranch Bison and the sammoorai of MooShu). The five each have a special ability that you will only find from this bundle which I could go into more detail if you wish. Each are hard to obtain and finally leads to the battle of the Zebra trader and in the end you can obtain one of the 5 as a companion. You also get all the other bundle bonuses and adds various side quests from prisoners, villagers and traders.

Hope you enjoyed P101 Zafaria post number uno, number two will be out tomorrow with some images I have made of what it might look like and a bit more in depth look on the world itself. Question of the day, do you like this bundle idea, what world would you like to see Pirate101 make a world bundle out of? It can be a world in W101, a world mentioned or even a made up world. Comment below let me know! Once again I always have a poll to the right and if you would like to give feedback on what you would like to see vote today. Until tomorrow I am Nicholas LionRider and I will see you tomorrow!

Posted by Nicholas LionRider at 3:56 PM