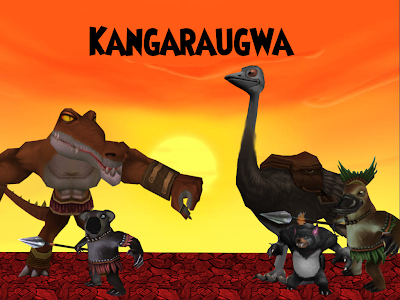 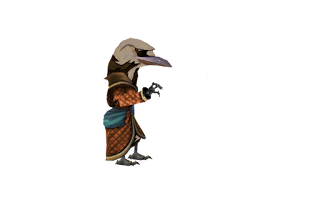 Yes I know I haven't posted in about a month. With all of my projects I haven't had the time to blog but from now on I want to blog at least once a night for the remainder of the 2012 year. So with Zebrifica being made into Zafaria and all of the new confirmed worlds I decided that I don't want to make a bunch of ideas, art and waste time when  I know that in the end it will come out so I said, what world would I personally like. I thought how I really do like exotic wildlife and so what better world inspiration then Australia. I really love the wildlife and the extensive beauty so a side world of this idea would be nice. Now instead of doing a little bit of concept art here and there I will just give you guys about 7 pieces right now. Also the top of my post is my first wallpaper for the world if you would like to download it.

First up is the Saltwater Kroks: A animal that is strong and well known in Australia is the Salt water crocodile, as a spin of of Wizard101 I thought they would look much like their cousins of Krokotopia. Since they aren't Egyptian however I thought living in harsh conditions of Australia they became large, stronger and tougher than those of KT. They have reddish skin which I thought is actually a much better alternative to give the game a little bit more color. I really like this and I hope you enjoy too here is the deadly king of the waters of Australia, the salt water kroks.

Second is the native species of the island, the Koalas. These small marsupials are really hard to defeat prior to their actual size. They are small and hold spears and their standard Kangaraugwa necklaces. The Koalas can be black, brown, or grey.

Deleted character: This species of character is called the Kookaburra Mage, she is very deadly and uses magic and the art of fighting when attacking, you can talk to one of her "good" kind Betta Small claw to train at the moon school to get the olyphant and raven polymorphs.

Glad I could talk to you guys again I know it has been like forever. Post comments telling me what you think and if you would like the renders of each character you see please email me at njd525@gmail.com and don't forget to follow if you want to see more great posts and more artwork. Until then see you in the spiral -Nicholas LionRider
Posted by Nicholas LionRider at 3:04 PM